by Church of Hed 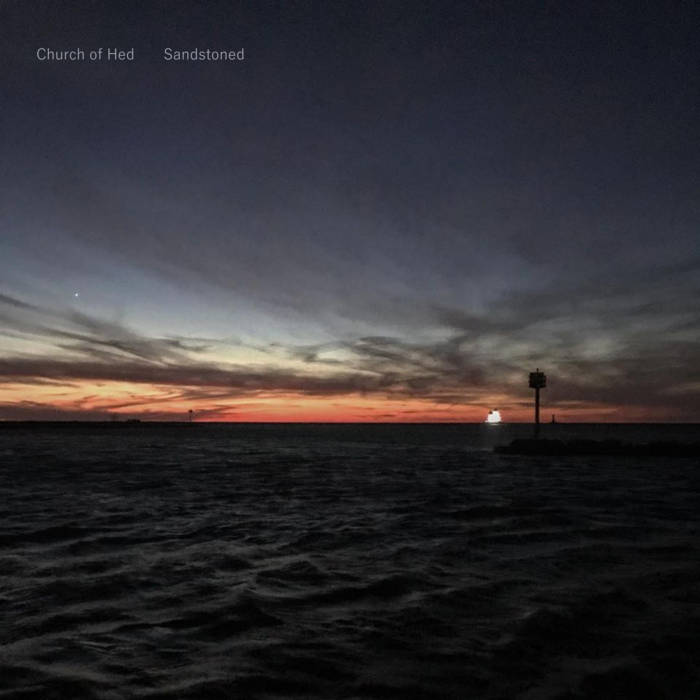 Sandstoned presents ethereal and electronic postcards from the North Coast. Inspired by the nighttime ambience of Lake Erie and nearby locations, the album veers between electronic beats and spacier arpeggiations overlaid by kinetic human playing. The ghosts of CAN, Cluster, Brian Eno, and others lurk within its songs and soundscapes.

Released both on CD and digitally, Sandstoned is available for download from Bandcamp, iTunes, Amazon, etc. as well as the usual streaming services, such as Apple Music, Spotify, YouTube, etc. Remember to support Indie Music!

You never know what kind of surprise you’re going to get with a new Church of Hed release, but it’s always going to be something different than the previous one – that’s the way the architect of the project Paul Williams works; never content to stay in one place for too long, he’s always looking for new ways to utilize his multi-instrumental talents to achieve new electronic hybrids that are at once cutting edge and satisfying. Being a drummer and an imaginitive keyboard player and composer, he really has all the bases covered, but this time he has brought in his old Quarkspace bandmate Stan Lyon to play guitar and bass on about half the cuts, adding a new dimension to the sonic fabric.

While the previous album Brandenburg Heights was in many ways influenced by the Berlin school electronics of Klaus Schulze, early Tangerine Dream and others, featuring epic length tracks that stretch out in many dimensions, Sandstoned features a more angular and experimental attack, consisting of ten succinct tracks that are typically in the three to four minute range (although the sweeping epic “3 AM at Hole in the Wall” is a notable exception, clocking in at nearly 11 minutes). “Synth Cadence” which appears early on in the program makes brilliant use of electronic percussion and dark gritty pulses until it opens up widescreen with some crazy twisting synth moves. It’s only a couple minutes long but it really has an amazing groove in tow. Both “1 AM at the Dean Road Bridge,” “2 AM at Crownhill Cemetery” and the aforementioned “3 AM…” are inspired by the night time ambience of places around Lake Erie, and truly convey the feeling of night with a dark, Cluster meets Michael Hoenig like feeling. “Dark Matter Sandstone” offers a powerful groove with sweeping synths and a simple underlying pulsating bass figure, all a bit reminiscent of Michael Garrison. Barely over a minute in length “The Prodigal Swanson” makes magnificent multilayered candy using synths alone. There’s a lot of variety across these pieces that makes for a fun listen that never gets old.

Church of Hed is Quarkspace founding member Paul Williams’ solo project that he has immersed himself in since the mothership band ceased activities. Sandstoned is the new album and is what Williams describes as “a surrealistic window on an early 80s evening on the North Coast of Ohio. Psychedelic postcards sent forward in time.”

I’ve been following Williams’ music since first discovering Quarkspace in the mid-90s, and I’ll say right out of the chute that I think this is one of his best solo efforts. We’ve got bits of Quarkspace, the trademark Church of Hed beats and loops, a deep space inspired brand of prog rock, and an impressive sense of thematic development as well as a soundtrack vibe permeates throughout the set. The music is all Williams on an arsenal of synths, keys, drumming and loops, with guitar and bass assistance from Quarkspace alum Stan Lyon on five of the ten tracks.

The set opens with the title track, which combines floating space ambience, Berlin school electronica, cinematic classical prog and, of course, the electro beats that characterize all things Church of Hed. This is followed by Synth Cadence, a short drum and robotic grooves ditty. We then launch into intensely majestic space-symphonic prog territory with 1AM at the Dean Road Bridge, which blends a fully orchestrated sound with shades of Quarkspace. Dig that looming Mellotron sound, piano, pounding timpani, and eerie effects.

We veer back into the cool grooving beats, piano and flowing streams of space synth action on Quarrydosing, before soaring back to Berlin (ed: Amherst?) with 2AM at Crownhill Cemetery, with its syncopations and cosmically haunting magic carpet ride drift. Williams injects lots of fun effects but also drones that create a tension between meditative space and anguished intensity. Field recordings conjure up imagery of someone perhaps prowling the cemetery in the wee hours of the morning.

I like the way the music zips between and combines heavy prog, space electronica and beats/loops. Dark Matter Sandstone has a flowing space melody that sails along with off-kilter dance grooves. Wallace Lane is another track with an aura of the old Quarkspace sound. But it’s a bit different due to the clattering percussive ensemble that crashes steadily along with a playful electronic melody. Cool and strange contrasts!

Most of the tracks are in the 2-5 minute range, but at nearly 11 minutes, 3AM at Hole in the Wall is by far the longest and is very much like an old Quarkspace epic. I love how the music dovetails between heavily majestic and theme developing prog rock and spacey meditative drift. The Prodigal Swanson (Jay Swanson was Quarkspace’s keyboardist) is a brief yet intensely frantic piece. And Sandstoned No. 2 closes the album with the most pounding dance floor grooves of the set, and an old sci-fi television soundtrack theme vibe.

I keep saying this but I’ll summarize by emphasizing that there’s a lot going on throughout this album, bringing together oddly contrasting elements that mesh, morph and blend beautifully. Williams is deep into heavy classic prog territory, yet there are plenty of seriously spacey elements, and it’s all very soundtrack/cinematic feeling throughout. Bravo Paul!

Pete Pardo of Sea of Tranquility

Sandstoned is the latest release from space rock/electronica act Chuch of Hed, which is the current project of Quarkspace mastermind Paul Williams. With his former band basically on indefinite hiatus, Church of Hed has been Williams' main form of musical expression these last bunch of years, and here he's helped by bassist/guitarist Stan Lyon on this collection of ten chilling & fascinating compositions.

Williams has always been quite adept at laying down some impressive synth soundscapes, and he's once again in fine form on Sandstoned, as eerie, Tangerine Dream styled arrangements littered with fluttering blips, beeps, colorful synth tones, and lush keyboard orchestrations make up the bulk of the musical landscape. Also contributing drums & drum programming, Williams adds a touch of bombast and almost 'dub-step' percussive elements to a few of the tracks, quite effective on the wild "1AM at the Dean Road Bridge" as well as "Wallace Lane". With his assortment of Moog, Korg, Yamaha, Kawai, Roland, and Waldorf synthesizers, Williams turns tracks like "3AM at Hole in the Wall", ""Dark Matter Sandstone", and the haunting title track into interstellar explorations, easy ear candy for your senses.

Inspired by the nighttime ambience by Williams' home in Ohio along Lake Erie, Sandstone is an intriguing listen, a plethora of extraordinary sounds colliding together for a fun collection of electronic music.

Church of Hed is the solo electronic space prog project of Quarkspace drummer/synthesist, Paul Williams. RIYL: Floyd, the Orb, Stereolab -- Quarkspace is an American band together since the mid 80s. Known for combining spacerock and electronics with folk and progressive songwriting, their influences straddle the American and English psychedelic scenes of the late 60s with more modern influences. ... more

Bandcamp Daily  your guide to the world of Bandcamp